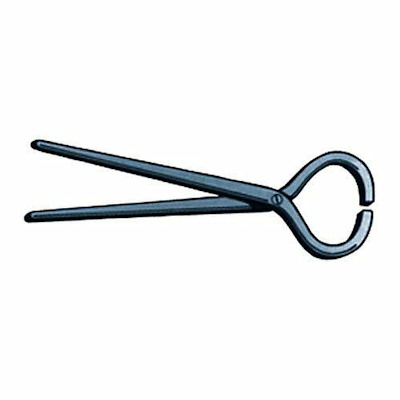 12 inch Stainless Hoof Tester,opens to to 6.5 inches to apply pressure to any part of the foot to locate sensitive areas.

The Use of Hoof Testers by David Turoff, DVM published in ANVIL Magazine, April 1998

Examination of a hoof with testers should be systematic, consistent, and should cover all points of the hoof. The actual sequence of points tested is relatively unimportant, but should be the same from time to time, so that nothing is missed. The examiner should try to apply the same amount of pressure each time, to keep variables to a minimum. A positive response consists of a reflex withdrawal of the foot. This must be distinguished from nervous or irritated (but not painful) withdrawal of the foot. The key is consistency. A true pain response is infinitely repeatable; the same stimulus applied many times, should produce the same result. In contrast, a nonpainful withdrawal after the stimulus is applied several times will produce a reduced response, or no response.

Application hoof testers: Beginning at one quarter, the sole is tested for sensitivity to pressure in a continuous are around the hoof. Care must be taken to place the lower jaw of the testers on the outer hoof wall, and NOT on the coronet, as this will produce a strong false positive result. After completing the are in one direction, close to the white line, the sequence is repeated with the tip of the jaw closer to the frog. In actual use, the distance between tested points is actually smaller than those shown, and therefore more points are tested. Conditions which might elicit a positive response include, but are not limited to, sole abscess, stone bruise, laminitis, pedal osteitis, and fractures of the coffin bone.

The next steps are the testing of the frog, heel and navicular areas for pain. The upper jaw tip is placed over the middle of the frog, with the lower tip half way between the edge of the hoof and the coronet. Each half of the navicular region is then tested by placing the upper tip in the frog sulcus beside the middle third of the frog and the opposite hoof wall. Finally, the heel is spanned from medial hoof wall to lateral hoof wall. Conditions which may elicit a positive response include deep abscesses, very severe thrush, navicular disease, navicular bursitis, and other soft tissue components of navicular syndrome, and fractures of the navicular bone or wings of the coffin bone.